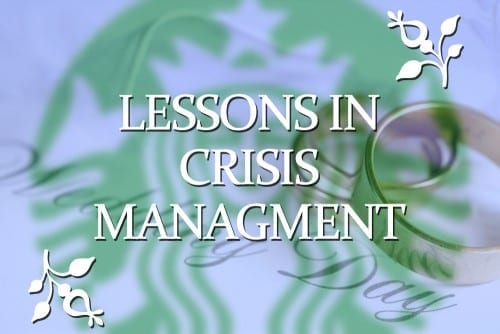 I am watching the Maldives wedding story with interest athttp://www.bbc.co.uk/news/world-south-asia-11644328 – an English understanding couple are married in the local language which wasn’t quite the words you expect. Will it really affect tourism to the beautiful islands or is it a media storm in a teacup?

The following viral received today and below add to an otherwise quiet week – but both have crucial PR issues to resolve.

Recently, British Royal Marines in Iraq wrote to Starbucks because they wanted to let them know how much they liked their coffees, and to request that they send some of it to the troops there.

Starbucks replied, telling the Royal Marines thank you for their support of their business, but that Starbucks does not support the war, nor anyone in it, and that they would not send the troops their brand of coffee.

When the Twin Trade Towers were hit, the fire fighters and rescue workers went to Starbucks because it was close by for water for the survivors and workers and Starbucks CHARGED THEM.

STARBUCKS HAD STORES ON SEVERAL MILITARY BASES IN THE UNITED STATES. THEY ARE NOW BEING REMOVED BECAUSE OF THIS.

There are 227 Starbucks stores across the UK, and there’s no doubt that our soldiers would get the same response from this company

PLEASE BE KIND ENOUGH TO PASS TO EVERYONE ON YOUR E- MAIL LIST, IN MEMORY OF ALL THE TROOPS WHO HAVE BEEN WOUNDED, LOST LIMBS AND EVEN DIED, SO THAT WE MAY HAVE THE RIGHT TO CHOOSE, WITH THIS KNOWLEDGE, WHETHER WE BUY THEIR COFFEE!