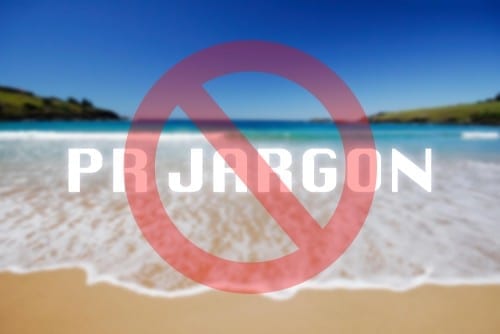 There’s something about PR that stretches words beyond their elastic limit. Here’s 10 of the worst.

Using the word in a press release is a bad enough, but if you hear anyone saying “leverage”, that’s either that they’ve had to stick to the wording in a US issued release or they should be writing a DIY manual. Permission to LEAVE THE ROOM!

Groundbreaking?  Really?  Prove it!  Press releases are meant to be informative.  The reader , usually a journalist, can decide whether they think the product is truly groundbreaking.   Oh and don’t forget other common bed-fellows:  revolutionary, best in class and cutting edge.

Particularly rife among new technology businesses is the constant comparison to hugely successful tech companies.  For example “Twitter for the Millenials” What’s worse is that these comparisons are usually tenuous.

Certain press releases would make a lot more sense if you read them as a poem instead.

Newer and newer and even newer things pour forth from PRs, who fall over themselves to share the overwhelming newness. “This new product is so innovative that it totally disrupts the way things were done before.”

Other offenders in this area include new, social, platform, innovative, seamless and user friendly.

Often used in conjunction with “solution”, or worse still “delivering solutions”.   In case you were wondering, turnkey means off-the-shelf and can result from immediate work following too much wine at Christmas dinner.

In the UK it’s actually illegal to omit the word delighted from press releases. To anyone who is new to PR extra points are given for using any of these terms: unique, empower, best practice, and passion. Bonus points are awarded for using: dynamic.

If you insist on using this phrase, combine it with at least one other metaphor or cliche to ensure maximum confusion and eye-watering embarrassment in the boardroom: “I don’t want you beating around the bush, you need to make a grab now for that low-hanging fruit.”

How should they define leading? Are we talking page views; social media shares; percentage of ABC1 readers?  Fastest growth? Smallest? We could probably claim one of those.  Why not.  It’s the internet so who’s checking.

A kind of a buzzword.  True? Group together with other clichés.